AGORAPHOBIA AND ANTHROPOLOGY by Molly Doane

I feel like lately I have read quite a few accounts of agoraphobic middle-aged women. They don’t like to grocery shop or go to work or otherwise leave the house. I think, “of course you are agoraphobic.” I think, “agoraphobia is an irrational fear of the outside world. What is irrational about fearing the outside world?” I became a gardener in my late thirties after years of doing nothing of the kind: before I cycled and ran and spent hours at the gym. The garden is an extension of the house, surrounded by fence and foliage; it is an outdoor room enclosed from the city streets.

I always thought it was kind of cruel to keep cats indoors. They should be allowed to roam as is their wont. Why should cats be restricted for their own good, like so many Victorian wives? Yet lately I have become an indoor kind of cat. I cannot precisely place the transformation. I feel however that I have less and less interest in what goes on outside of my house. I have no interest in meeting new people. I don’t like to try new restaurants. I don’t know what this is exactly. A creeping fear or shyness, sensory saturation, diminishing returns? My husband, who is perpetually writing four novels at once, feels we are mirror opposites. His surfeit of interests makes it difficult for him to finish anything and so he feels like he accomplishes nothing. In contrast, he thinks I have become overly specialized. I have narrowed down my interests so much that I am in constant danger of attempting nothing. And yet I must do something. I am a relatively successful anthropologist. But the struggle is there.

Where does the struggle come from? As I age, I do find it less satisfying to live an outside kind of life. The ambient vibes, positive and sexual, don’t bounce from the pavement anymore. In fact, there is a negative or absent quality to my public face. Being in public I am no longer affirmed, and sometimes I am effaced. Recently, I was in a café awaiting someone I was to interview. We had not met, but we had exchanged descriptions: he, grey-haired, medium height, thin build; me “big” curly dark hair, on the short side. I saw him arrive, order his coffee. This was obviously my informant—he was the only grown-up in a small sea of Midwestern college students. I waited for him to approach my table. I watched as his eyes scanned the crowd and scanned it again. I watched him turn back to the coffee counter to see if I was there. I watched him turn to scan the crowd in my direction another time, his eyes never touching my face, as though they had an internal editor. At that point I hailed him enthusiastically, with a smile, and we proceeded with the interview.

My experience as a college professor has been disillusioning. Even in the enlightened university hamlet women ought to “be nice.” If your colleagues find you pushy, aggressive, or bossy (a former boss’s preferred adjective to describe me) within the department you might not get tenure. If you are not assertive, confident, and self-assured outside of the department you will never get past the negative reviews of your colleagues, essential if you want to publish and not perish.

And I am also more fearful. Out at a salsa club in Mexico a few days ago, I told some friends that I had once ridden my bicycle through Mexico. “And yet now I am terrified I will be hit by a car as I walk along on the sidewalk.” It is just mortality, said my friend. You are becoming aware of your mortality.

Mortality, sexism, diminishing returns. These are all persistent themes in our lives, and yet we live them still. I notice the themes in Chiapas, Mexico, where I study coffee farmers. To get to the coffee communities, I take a collective taxi on a daily death-defying journey over curving mountain roads that the taxi drivers handle quite deftly. As they narrowly avoid the oncoming traffic, they tell me stories of migration. Pasqual tells me he was a gardener, a carpenter, and a handyman in Washington. I ask which Washington? He says the one that is the home of George Bush. We laugh. To arrive in Washington, D.C., he had crossed the Sonora Desert in Arizona. It took four nights of walking, with some hours of rest during the day. The polleros (this literally means someone who raises chickens) charged $2,500 and took him in a truck to Virginia. Life was very sad, he said, during that year, because he missed his family. But he said life in Tenejapa is also very sad because you can’t earn enough money and that makes everything hard. You make maybe 80 pesos a day ($7.50) and you have to buy food out of that and everything else. (Groceries are running me about $10 a day). I have heard dozens of variations on this story. Some taxi drivers allude to the deaths of compatriots. Increasing border security has led migrants to across ever more dangerous desert routes.

Dangerous crossings are not new. Before roads and buses made it possible for rural people from the far south to migrate to the border, they made long journeys to the coffee plantations on the coast. What is now a bus journey of a few hours from mountains to seaside was once also a four-day walk. A snapshot. Alonso, Ana, and their son Umberto are together a nice family. They fill in each other’s stories and listen to one another with interest and compassion. The couple is in their late sixties. Their unmarried son is in his thirties and their only helper. Umberto tells me they have had a particularly hard time in the last few years because they are Zapatistas and therefore have lost access to the few government programs that exist. They grow organic coffee for the fair trade market and organic honey. Alonso and Umberto dress me in a beekeeper’s outfit to take me on a tour of their hives.

Alonso, the father, was an orphan. His dad died when he was ten of drink and his mother when he was 12 of fever. So he had to go work on a coffee plantation when he was ten, at first working in the kitchen because he was too young to work in the fields. When he was 12, he began agricultural work on the plantation under the care of a man from his own community. The man felt sorry for him and was kind, making sure that Alonso got to pick the most loaded trees so he could fill his bags quickly and earn well. Alonso worked seasonally for 12 years on this plantation. As an adult the work was much harder. He had to get up at two or three in the morning and work until five in the evening. He worked from about 1950 until about 1975 on the plantation where he often “felt lonely in his heart.”

Eventually he inherited six hectares from his father’s estate and married Ana. At first they grew peanuts for the world market and corn and beans to eat. Alonso continued to work seasonally on the coffee plantation. About thirty years ago he started growing coffee, which was promoted through a government agency called INMECAFE. At that time, the government had a lot of progressive programs aimed at raising the economic position of rural people. Growing coffee at home meant that Alonso no longer had to make the seasonal journey to the coastal coffee plantations. Coffee cultivation has brought some improvement for Alonso.

In the old days, Ana had to bring all of their water for drinking, bathing, and cooking from the well that was one and a half kilometers away. There is now tubed water, but even with this improvement, life is still very hard. Ana is too weak to grind the corn for tortillas, even though it needs to be done, and making tortillas is painful because she has terrible rheumatism. Ana says: I want to die already. I am ready to die. I am discouraged with this coffee. There is still no result. Look at my kitchen. It is falling apart. It is like the house of the black wasp [a mud house]. All of our work and I live in a house like this. I would just as soon abandon the coffee and go live in a cave! Ana starts to cry.

I know how she feels. I want to abandon it all and go live in a cave! Of course, unlike Ana, I get to escape the grind. I often retreat to my garden, my cave. It keeps me satisfied and sane. But when am I happiest? When hurtling irrevocably toward an oncoming semi, ranchero music blaring in my ears, the taxi driver busily looking for a new CD he would like to play. Or stuffed into a beekeepers suit, stiff as an astronaut, deafened by the whine of worried bees and blinded by smoke. 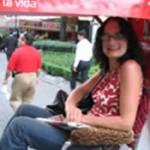 Molly Doane is Assistant Professor of Anthropology at the University of Illinois at Chicago. She studies the producers of fair trade coffee in Chiapas, Mexico, as well as the roasters and consumers who purchase it in the Midwest.

Any reprint of a featured story on this website will need author permission and an appropriate citation to Dare to be Fabulous. Please send your inquiry to info@daretobefabulous.com.